Looking for a Plumber in St Albans

If you’re looking for a plumber in St Albans to fix your heating or plumbing problems then you’re in the right place.

Working with us is easy. Simply call us (or use the online form) for a quote. Tell us the problem and where you are and if you’re happy with the price, we can come and fix the problem at your convenience.

Booking a Plumber in St Albans is Easy with Us

We provide a range of heating and plumbing services in St Albans. Here are some services our plumbers carry out in St Albans, Hertfordshire.

We’ve been providing plumbers in St Albans to fix heating and plumbing problems in homes since 1998.

St. Albans is a city in the commuter belt north of London, England in the home county of Hertfordshire. Its vast centuries-old St Albans Cathedral features medieval wall paintings.

Nearby, Verulamium Park has ornamental lakes and the remains of the city’s ancient Roman wall. Also here is the Verulamium Museum, displaying artefacts from the city?s Roman past, including mosaics and the Sandridge Hoard of gold coins. A 2nd-century Roman theatre stands nearby.

If you need a plumber in St Albans Hertfordshire, then contact us. 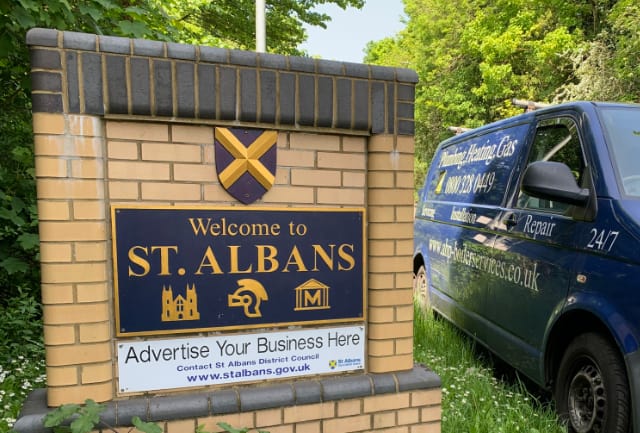 Peter Chadwick
Superb service provided by the boys from AHP – an old boiler inspected and the new one installed in record time; throughout this the guys were professional and skillful whilst remaining friendly and personable at all times, answering every question and returning phone queries within minutes. I would not hesitate to call again should the need arise and can only recommend their effectiveness and friendly demeanor.
Dal K.
GET ONLINE QUOTE