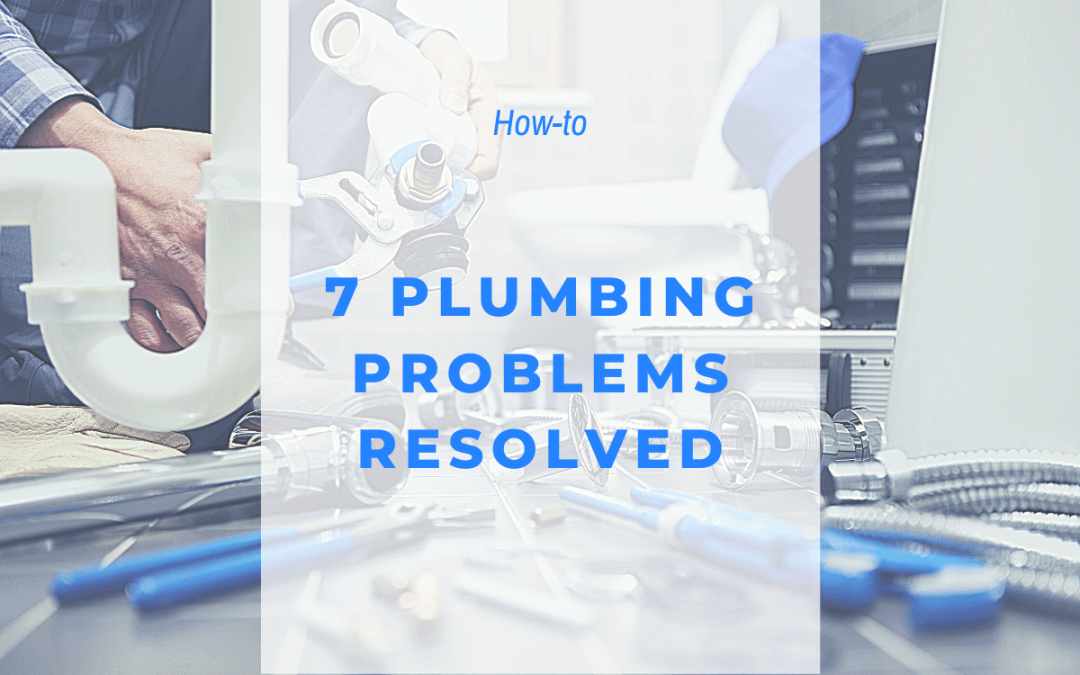 Here are some top tips for solving 7 common household plumbing problems, to help you know whether it’s something you can ignore or resolve yourself and when it’s better to call in a plumber to fix. In this article we cover:

The quickest and stress-free way to solve your annoying plumbing problems is to call us out. Our vans carry many common spare parts so we can usually get you back up and running in the same visit. Contact us for a no-obligation phone consultation/quote. We cover North London, West London, Herts and Middx and nearby.

This is normally a white pipe, found at high level on the exterior of the building which is constantly leaking water. This is due to the ball valve being faulty and not stopping the water filling the water tank or toilet cistern, so it overflows.

You can stop this by tying up the ball valve arm with some string to stop the flow of water, temporarily until you can get a professional plumber to look at the problem.

This occurs when high pressure water is travelling through a tap or a ball valve and, while running can cause a loud whining noise. Also, when the valve or tap is turned off, fast moving water comes to an abrupt stop, causing a shock wave through the pipe work resulting in a loud bang.

This can be repaired by a plumber who will then either

If your toilet isn’t flushing properly then the common cause can be a faulty toilet handle or push button. It’s usually an indication that the handle or button needs to be tightened up or replaced. It can also be the symphonic mechanism inside, which needs to be replaced as some mechanisms work on air pressure.

A noisy shower pump is often caused by air getting into the pump but not getting out again, causing the operation of water travelling through the pump to become noisier. You can resolve this by lowering the shower head on the shower, which will then allow the air to escape to quieten the pump.

Surging: Sometimes you can get the shower pump surging on and off, even when the water is not running with the shower pump off. Consequently, this can burn the pump out if not resolved. This problem is known as a ‘server airlock’. In order to resolve this, turn the electrical supply to the pump off and wait for your plumber to arrive to remove the airlock.

This will stop the pump from burning out and will cost you less money.

This happens when the spindle packing inside the vale has worn out or become damaged by lime-scale, corrosion or oxide sludge.

The valve will normally leak when in the ‘mid-open’ to ‘closed’ position. Get a professional plumber to repair this problem. In the meantime, you can stop the leak by fully opening or closing the valve or stopcock until the leaking stops.

Sometimes it’s possible to repair the valve by repacking the stem. However, usually the valve or stop cock will also need replacing.

Common areas that suffer ‘creaking’ pipes are usually your waste water pipes, when running hot water or when the central heating comes on.

When pipes get hot, whether it’s due to hot water running, central heating of radiators or letting the plug out of a hot bath, they expand. If a pipe is in a tight spot, hole, wall or under the floor running through a joist or floor board, they will make a noise when expanding.

The solution is to make the place the pipe travels through bigger and the noise will disappear!

7. Taps not turning off or constantly dripping?

If you have taps that are constantly dripping or won’t turn off, there’s 3 possibilities why:

If you are on a water meter turn off your mains water supply. This sort of plumbing problem will cost you a fortune in water costs. So, isolating your water supply is the first point of call and then call a local plumber.

There you have 7 plumbing problems that are common for many households. Including what causes them and then how to resolve them.

Got a plumbing problem that needs a reliable plumber to resolve? Book your appointment by contacting us today.

Disclaimer: The information contained on this website if for general information purposes only. You should not rely upon the material or information on the website as a basis for making any decisions or actions and we don’t accept liability for anything you chose to do with the information.

Booking a Plumber is Easy with Us

In London, Middlesex and Hertfordshire locations